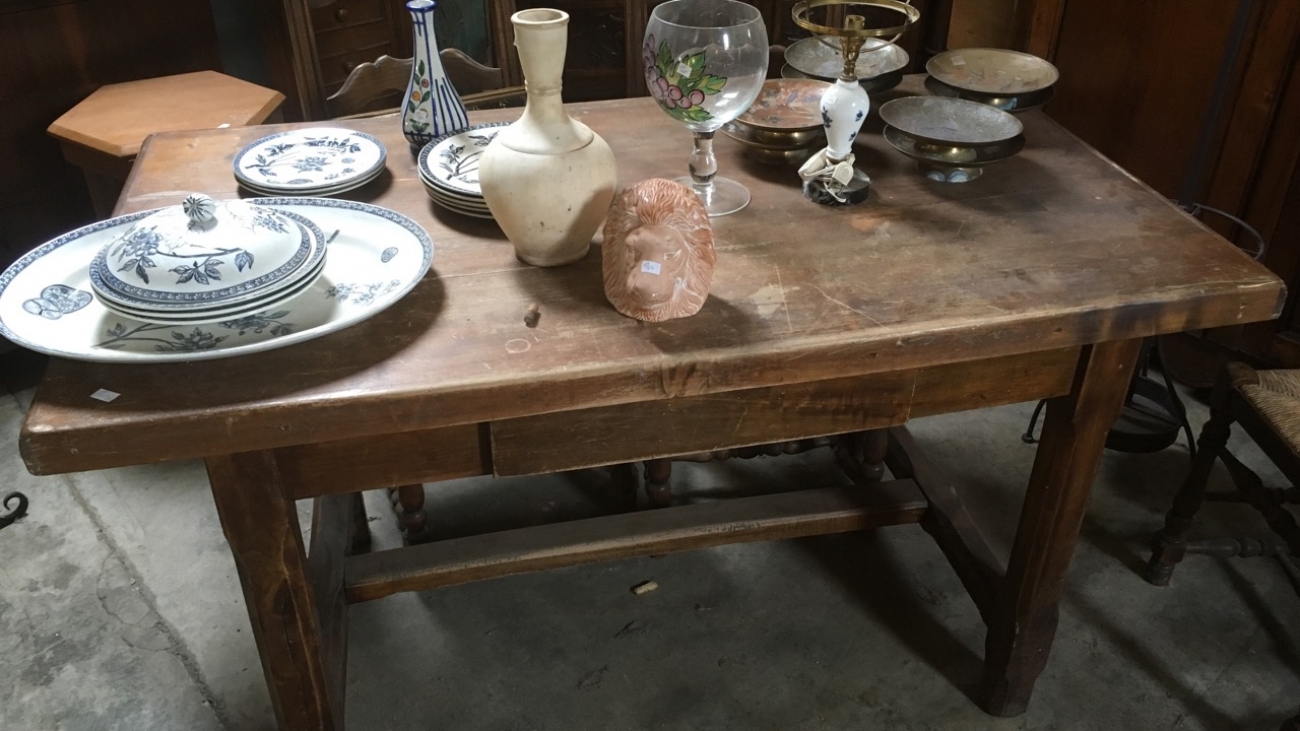 If you’ve been following our story you’ll know that in May 2016 we’d just arrived in our recently acquired house in Provence. Our village is called Jouques and it’s in a very rural part of the region and, although it’s unheard of by tourists it is well known to all the locals, for many reasons, mostly because it has a long and rich history back to Roman times (as well as evidence of pre-history), and also because it’s a very beautiful village.

For Jean-Louis and myself it was now home

We’d arrived with just a couple of suitcases each – the barest minimum of essentials to get by on – it wouldn’t be too difficult in the short-term we thought, since we were going into Summer. Well, we’d soon find out!

Our priority for now was to get started on finding furniture and whatever else we felt we needed along the way – and we were keen! First we checked out the brocante (second-hand and bric-a-brac store) that we’d discovered six months earlier in Meyrargues, and where we’d bought our bed before moving in (see previous post) – it was just 15 minutes from Jouques.

JL is never one to purchase anything quickly, let alone impulsively – so while I was probably over-excited about seeing loads of old pieces of furniture and could have bought six items on our first day of looking, JL was cautious. Too cautious for my liking – it was frustrating!

It was also rather overwhelming picking through what seemed like room upon room of assorted ‘stuff’. This place clearly acquired whole house-loads of furnishings and oddments then just emptied the truck contents into the yard without doing much sorting – so it seemed.

After a few visits we could see that a lot of pieces had been hanging around for years, the dust was so thick on them – this place was never cleaned – a positive for us since it had the feel of a place where we could find a bargain, something that had been overlooked by everyone else because there was so much junk in the way!

We grew to love this place, not just because we bought most of our first pieces here for bargain prices, also because it was a lot of fun to discover something that we ourselves had overlooked previously, wipe the dust off, see what repairs it might need (lots of pieces were in bad condition), then banter a bit with one of the old guys who worked there to get the price down a little – it wasn’t difficult! Well not in French for JL – it was harder for me – all part of the thrill though.

But really the guys were a push-over!

The first time we came to this place six months earlier, when we’d bought our house, JL found two old ladder-back chairs, while I found two olive pots that would make great utensil pots in the kitchen. Even though we were returning to Australia just a few days later we just had to have those pieces! After deliberating briefly, JL approached the two old guys to propose a price less than the marked total of €40 – to his suggested €30 they countered with €25! What? We looked stunned. However, quickly realising they were having their aperitif (pre-dinner drinks in France) we realised it was Happy Hour! Happy hour for us too to get our first bargain. This would become our preferred time to shop here!

We also loved it for the organized chaos! Most of the pieces were housed inside three long, curved-roof constructions that had once been used for raising pigs in (so we’ve been told), then there was almost as much stuff lying around outside. Here was the domain of quite a few foul: roosters, geese, chickens and chicks – all oblivious to the comings and goings of humans.

It was like going back in time in some ways, everything old and a little decrepit – a place transported from a vintage novel or film.

We were also told about a consignment store in Pertuis, about 20 minutes from Jouques, which sold decent old furniture too. Very different in that it was clean, organized, all items priced clearly and sectioned in rows within a modern building. Not quite as much fun to poke around but there were lots of nice pieces, generally in good condition – this was reflected in the prices, which, we quickly realised, were non-negotiable! There we found a beautiful wooden chair crafted from walnut wood – prized in France, ‘Noyer’ timber is hard, golden and apparently lovely to work with for furniture makers. This we snaffled up as fast as we could for €60, less than $100 for a very beautiful hand-crafted piece!

The reality in France is that these old second-hand furniture stores are closing shop en-masse, as the French generally and the youth in particular, are not interested in old pieces. They’d much rather have new furniture and they love IKEA! Ironically so much new, cheaply made furniture costs much more than the old items we’d been seeing and buying! Sadly we have even seen what we’d consider to be perfectly good, character-full old chairs, on top of a bon-fire for the festival of Saint Jean (a celebration in late June) – Sacre Bleue!

After about three weeks we had ourselves a couple of bedside cabinets, a magnificent dining table with a twist design in the timber legs, the walnut chair plus a couple of other chairs, and ideas for at least two other purchases – items which we were thinking about and might buy later if we couldn’t find a better option.

Alas though, we were still living out of our suitcases – so the hunt would continue for the all important wardrobe!