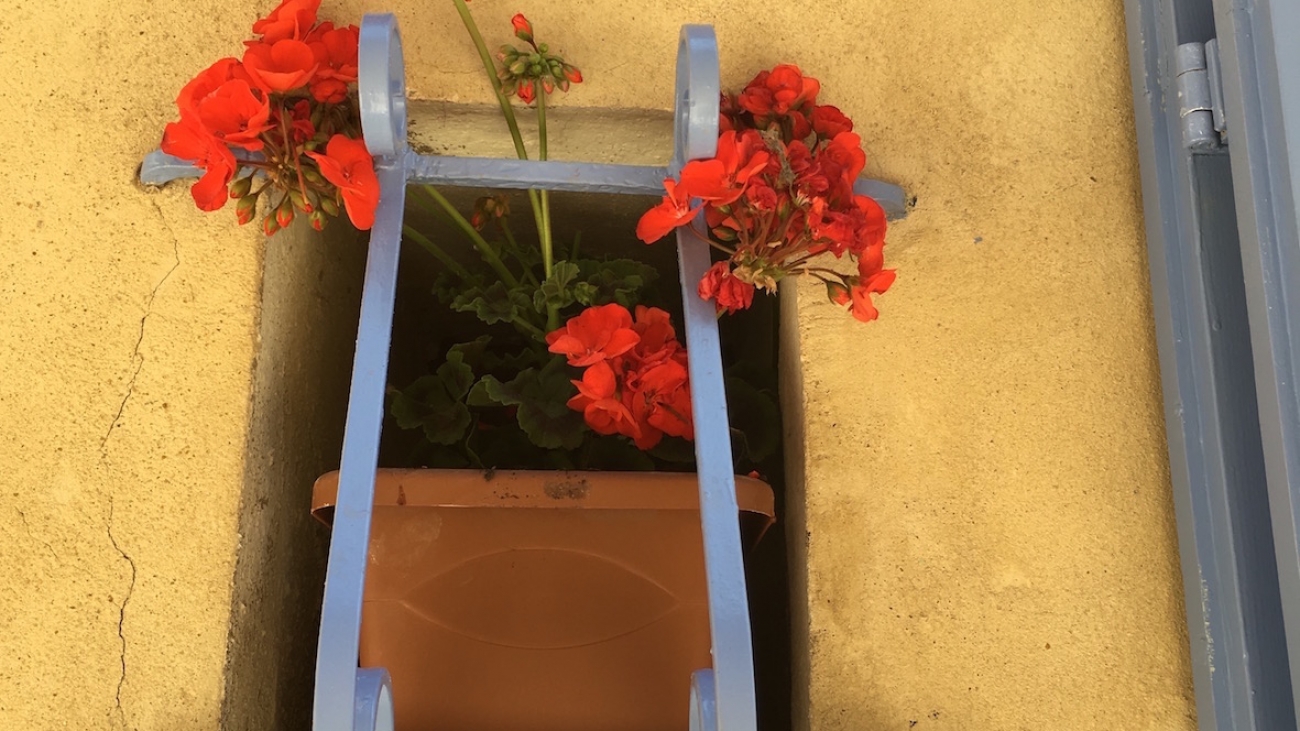 By mid May after being in our village home in Jouques for about two weeks, Jean-Louis was itching to get started on some work around the house. However, with all of our tools still in transit from Australia, and not wanting to buy things unnecessarily, we were rather limited as to what we might start with.

Although we had big plans for the uppermost floor of the house, those renovation jobs were to be quite extensive and would require all our tools and know-how. It didn’t take us long to decide that the French doors to the living room (le salon) and the kitchen (la cuisine) were not really to our liking in their present state, so a fiddly but essential paint job was required – perfect!

The doors all seemed to be well made and of solid timber which was great, but we felt that the varnished timber finish, which was very dark and dull, didn’t really suit the interior spaces, nor did it look quite right from the street view – mainly as the upstairs windows are all white. So we decided that painting the doors off white would improve their appearance tremendously, would help the interiors of the rooms look brighter and larger, and once the shutters were also repainted in a clean and fresh colour, the entire front of the house would look so much better!

And so it was decided

White French doors and lavender-blue shutters – this would be a complete change from the dull pale green colour the shutters were at that moment. As much as I love green (frankly it’s more my colour than blue), as a designer I can see what’s right for the job and, in Provence, the colour that seems oh so right for shutters is definitely BLUE!

Off to the hardware store we went for the first of many, many such trips to come – I didn’t need a crystal ball to predict that much!

But which hardware store?

We were to find it quite a challenge to navigate our way to realising that there are some serious differences in the way that hardware stores operate in France compared to Australia, as well as learning some of the lingo in French for all manner of DIY terms, not to mention the variation of quality across the suppliers. Our adventure in doing DIY in France was about to begin!

The choice of hardware chain-stores in our region is varied:
Monsieur Bricolage – which we soon found to be not so cheap and definitely not cheerful! Jean-Louis hastily invested in an annual loyalty card for €10. Yes, you are expected to actually BUY membership in many shops here! Whatever happened to this being given freely to customers! Needless to say he hasn’t paid for another.
Note: some stores like supermarkets do give free loyalty cards.
Brico-marché – just 20 minutes from home, this one has turned out to be JL’s preferred store for most things – although choice and stock is limited, the prices are reasonable and service is very good in comparison to other stores. Unfortunately it’s not particularly large so doesn’t have everything we need.
Leroy Merlin – a huge place that is on par with ‘Bunnings’ in Western Australia, but a little slicker and shinier in presentation. This is our go-to when Brico-marché doesn’t have something, even though it’s a 45 minute drive away. Prices are good but many things other than what is currently on special (en promotion) and everyday kind of hardware products, have to be ordered – we found that out the hard way!
Bricorama – a conveniently located store in Aix-en-Provence that is great to check-out when we’re in Aix and can just pop in to have a look. It’s almost old-fashioned in a jam-packed kind of way, with narrow aisles and high shelving, but it seems to have most everything for DIY inside and out – and we have occasionally found a few things in there.
Castorama – yet another mega chain store which is on par with Leroy Merlin, though not so glossy. Stock is slightly poorer quality and service is woeful – obviously we don’t frequent this one, once bitten, twice shy, as they say! The main issues we’ve had with poor service, not having goods in stock and being charged incorrectly have been here.

A few lessons (or: things nobody told us!)

A common trend in large stores in France generally, is that the onus is on the customer to check they have been charged correctly – if not, then the retrieval-of-funds process can be time-consuming and you will never ever receive an apology – not for the error and not for the wasting of your time! Probably a sign of the times, sadly.

Despite much frustration in our search for just the right paint colours and quantities of paint, we finally acquired everything we needed to get started and so we set to it. JL donned his cute blue overalls that have seen many a DIY project back in Oz and was unstoppable. I had the unenviable job of putting masking tape around all the edges of the glass panels and particularly into the corners – essential to hasten the painting process and keep the edges neat. It is one of those tiresome tasks that one gets quicker and more skilled at with practice. At the completion of the job, the peeling off of masking tape can actually be fun, but cleaning the glue off the glass is not! We may never choose to have French doors again in any home of ours after painting these two sets!

By the end of the first coat we could see that we’d made the right decision to go with off-white, as the freshness inside and out was remarkable. Finally getting to paint the shutters was the most fun – so much easier than the fiddly work involved with the doors, hence a quicker result!

We’re pretty happy with the final result – plus the whole of our little street is happy – we can feel it!